The government of Mozambique authorised AMA1 to build and operate a Liquefied Natural Gas Plant in the in the area of the DUAT (Land Use Right Area) granted to this company, situated on the Afungi Peninsula in Palma District, Cabo Delgado Province. The implementation of the project involves the physical and economic displacement of people and so it was necessary to prepare a Resettlement Action Plan.

The role of Impacto in the project is the provision of environmental and social services as well as planning and conducting a census of the affected population and making an inventory of their property. In addition we are as carrying out a socio-economic survey to collect data for future follow-up and monitoring after the resettlement. 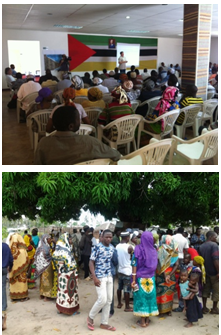 For the survey, Impacto has a team in the field comprising one resettlement specialist, three resettlement supervisors and several teams of community liaison officers and data collectors.

Impacto is also responsible for the following activities in relation to the project: