The EIAs focus on the areas included in the DUAT (Land Use Right Areas) allocated to Portucel Moçambique in Manica and Zambezia provinces, totalling 360 thousand hectares, of which 270 thousand ha are intended for planting with eucalyptus

The area, characterised by low population density and plantations in separate blocks, avoids major impact on the activities of the resident population. The project does not foresee resettlement of the population.

Alongside the main activity of forestation and conservation, the blocks to be planted will be provided with infrastructures as a road network, fire breaks and civil works. 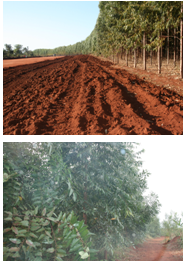 This infrastructure will support forestry activities and promote the partitioning and spacing of the forest cover, giving it protection from fires and from slash and burn land clearing.

The eucalyptus plantations to be planted in Manica Province are grouped in three blocks, covering five districts. It is planned to link the forestry project with other uses, economic activities and infrastructure in the area, resulting in   69% of the total area being used for forestry plantation  covering 153,000 hectares.

The forestry plantation to be developed in Zambezia Province covers 22 blocks with a total area of 187,000 hectares in two districts and five administrative posts – Ile District (Ile-HQ, Mulevale and Socone) and Namarroi (Namarroi-HQ and Regone).The spatial distribution of the blocks, protection corridors for water courses, infrastructure network and population centres are intended to create space for a variety of other activities, such as environmental protection, agriculture, livestock, social or forestry protection. The actual plantation cover is expected to be approximately  66% of the total area of the blocks.